Who I am - Benedetto Ciacciarelli - Photographer 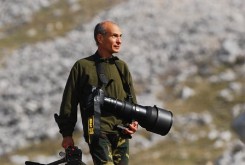 Benedetto Ciacciarelli is a naturalist photographer.

He was born in Italy, in S. Giorgio a Liri (FR), a little village situated on the borderline between Campania and Lazio, at the end of Liri valley, behind the Aurunci Mountains. In spite of urbanization, much of this area still possesses a remarkably natural and unspoilt countryside. Since his childhood Benedetto has been attracted by the marvellous nature of these places and examining the natural world around him, in order to understand it; has always been part of his education. In relation to this, photography has become for him the ideal instrument to capture an instance of the radiance and colour of reality. Benedetto is also a physics graduate, who specialised in geophysics. He works as a physics teacher and as a professional photographer for private and public companies.He has been working in different fields of photography: including work with advertising and industrial images as well as social reportage. However, it’s the naturalistic photography which gives him the most satisfaction. He grew up in a rural world where the only source of life for people was cultivating their own pieces of land. His personality was deeply influenced by this world.

As a photographer, a journalist, and an artist, he includes his inner feelings and emotions in his naturalistic shots and he is able to endure discomfort and fatigue to achieve the shot he has already conceived of in his imagination.